Last week our (sometimes) fearless leader, Anthony “Macka” Wilson, did an introductory course on Breath Enhancement Training with Nam Baldwin on the Gold Coast. It’s been a goal of Macka’s to explore breath training and hopefully overcome his panic attacks and fear of big waves.

Nam Baldwin is highly regarded in the field and works closely with elite athletes including Mick Fanning and Steph Gilmore. He is also working with the Australian Snowboard team and the Australian Kayak team in their preparations for next year’s Olympics. I sat down with Macka to find out more about his time with Nam and the course. 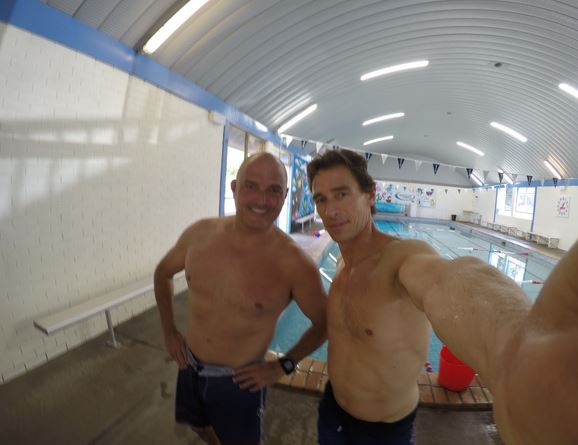 Why did you do the course?

AW – I had heard about Nam and his work with Mick Fanning about 18 months ago and it sounded really interesting. The more I looked into it the more I thought it would benefit me.

What’s the story with your fear of big waves?

AW – I have had two near drowning experiences and they pretty much shook me up. The first one at Tuncurry bar rattled me for a while, I swallowed a fair bit of water and surfaced just when I thought it was all over. The second one was the day before Ness and I got married in Fiji. We were surfing Wilkes passage, it was about 6ft plus, the wind was a bit onshore and it was a kind of lumpy swell. There had been a lull for a while when this rogue set mowed us down. Everyone made it over it except my mate Hop and me. The thing broke just in front of us and detonated. I threw my board and Hop tried to duck dive as he was on a borrowed board. I was held under for so long. I tried everything. I opened my eyes looking for daylight but everything was white, I grabbed my legrope and found my board but we were getting smashed in the washing machine. I thought I was a gone and swallowed a fair bit of water. When I eventually popped up I couldn’t breathe at first and had a bit of a chunder. Ever since that day I freak when the swell  is any bigger than 4ft.

AW – I get really anxious when the swell gets bigger. I get this rising panic that doesn’t go away, it’s kind of all consuming. I guess it’s the mind’s way of not putting myself in that situation again.

What was involved in the course?

AW – first we went through the the science behind the program and what happens when the body is under CO2 load. Nam hooked me up to his laptop and did some breathing tests. We went through diaphragmatic breathing and the way breathing influences your heart beat plus he showed me some exercises.

Next we did some exercises in the pool. We started out with breath holds swimming under water and simulating getting 6ft sets on the head then focusing on recovering as quickly as possible and doing it again and again ..and again! We wrapped up the first day doing zero breath holds where you breath out and then go under.

What were your improvements?

AW – the first time we did the zero breath hold I lasted 22 seconds. A few goes later I was making it to 1 minute and could have gone longer. That was a spin out.

Have you noticed any benefit?

AW – definitely. I’m way more focussed on regulating my breathing and breathing from the bottom of my lungs. I have surfed a few times since and by using the techniques I definitely recover quicker. I am looking at getting Nam down to Port Macquarie for a session with our junior surfers and we may also get him to do an open session for our friends and clubhouse crew if there is enough interest.

Will it help with your fear of bigger waves?

AW – I’m thinking it will but until I test myself in 6ft plus surf who knows!